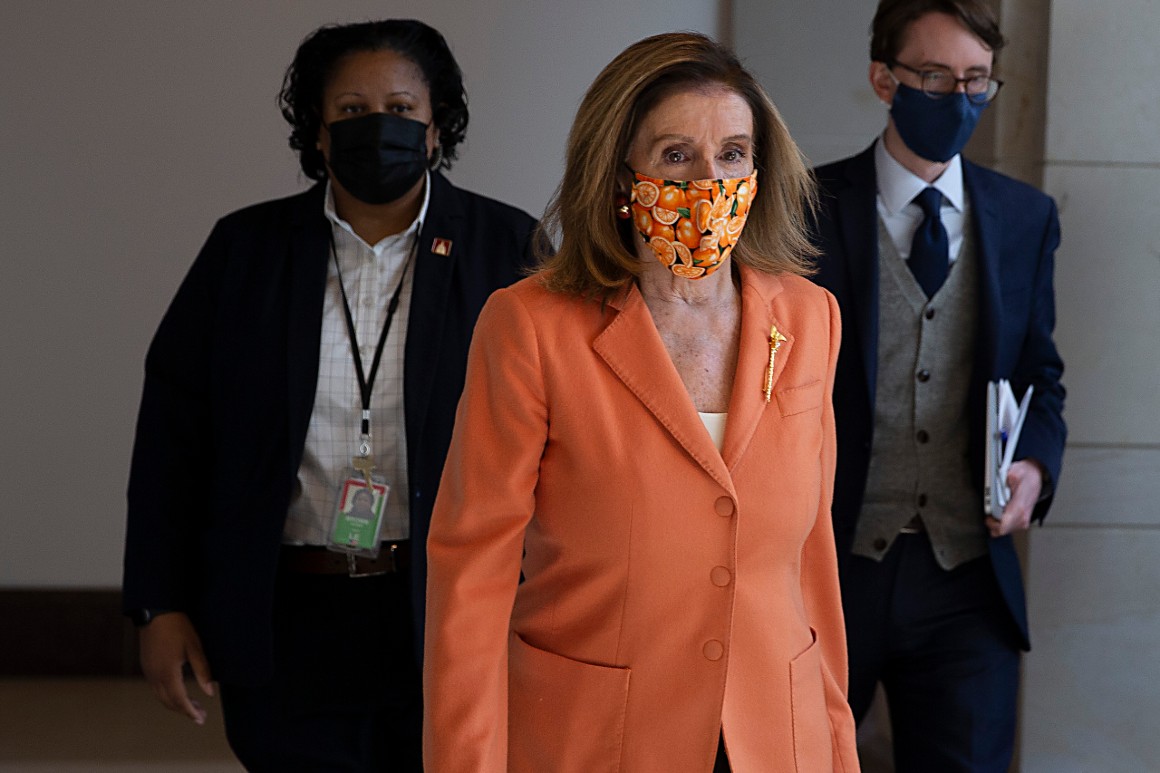 Pelosi’s comments appeared to be a change in direction for Democrats, one day after she and some top lawmakers had privately discussed moving ahead with an airlines-only relief bill as soon as this week. Several Democrats, including a key chairman, had been demanding urgent action on airlines with tens of thousands of jobs at stake this month.

But on Thursday, Pelosi stressed to reporters that those talks were on hold — if not abandoned altogether — until President Donald Trump was willing to come back to the table on a multi-trillion package that she and Treasury Secretary Steven Mnuchin had been negotiating for months.

“Let’s take a serious — not a skinny, not an emaciated but a serious appropriate approach — to crushing the virus,” Pelosi told reporters.

Trump, just weeks ahead of the Nov. 3 election, abruptly pulled the plug on stimulus talks between Pelosi and Mnuchin Tuesday, one day after being released from the hospital following treatment for coronavirus.

Trump had said the talks were going nowhere and he’d rather focus on confirming Amy Coney Barrett, his nominee to the Supreme Court, before the election and then pivoting to coronavirus relief in November. The move drew an immediate rebuke from Pelosi, centrist Democrats and even some Republicans — many of whom were hoping for a major relief deal to clear Congress before the election. Trump later appeared to reverse his decision.

Since then, it’s been nothing but confusion and mixed signals at both ends of Pennsylvania Avenue. Pelosi and Mnuchin have continued to talk, with Mnuchin even floating the idea of coming together on a major stimulus package during a phone call Wednesday evening. But the two remain far apart on key issues, including funding for state and local governments and unemployment aid, not to mention having yet to reach agreement on a topline number.

“When the president did his tweet, that one that said he was walking away, I think he surprised a lot of people,” Pelosi said Thursday. “I don’t want to go into who they are right now but it was a disservice to the discussion that we were having in good faith.”

And Trump himself signaled he could be open to a major deal during an interview on Fox Business Thursday morning — his first since being released from a hospital after contracting the virus.

Meanwhile, the U.S. economic recovery is flagging — with layoffs mounting as federal rescue aid dries up — and the public health toll is continuing to rise. More than 210,000 American have died from the coronavirus, with millions more infected, some with long-lasting health effects.

The House passed a $2.2 trillion coronavirus relief package last week along party lines. The bill was a pared down version of similar legislation the House passed in mid-May. Both bills were roundly rejected by Republicans.

Even if Mnuchin and Pelosi did reach some kind of agreement, Trump would have to put his political muscle behind the deal to get it through Congress, where Republicans in both chambers have rejected the idea of passing another major relief deal with a price tag above $1 trillion.

And it would all have to be done while the House and Senate — not to mention Trump — are in the throes of a critical election that will determine control of Washington next year. Few lawmakers are interested in leaving the campaign trail for Washington in the dwindling days before Nov. 3.

Shortly after Trump tanked the stimulus talks, Pelosi and her leadership team began discussing a bail-out package for the airlines. But the prospects of a standalone bill further dimmed on Thursday when two key Senate Republicans said they would oppose a proposed measure to bolster the sagging industry.

Sens. Pat Toomey (R-Pa.) and Mike Lee (R-Utah) said providing relief to the airlines “should not happen” without time to debate changes to the bill, casting doubt on the Senate’s ability to quickly pass a standalone bill, even if there was an agreement.

Toomey and Lee, who are among the chamber’s most ardent fiscal conservatives, are not alone in their opposition. Sens. Rand Paul (R-Ky.) and Rick Scott (R-Fla.) have also expressed reservations. And with Senate Republicans aiming to confirm Barrett to the Supreme Court before the end of the month, any coronavirus relief package would likely require the consent of all senators in order to pass quickly. Using several days of floor time on an airlines package could throw off Majority Leader Mitch McConnell’s (R-Ky.) timeline for the Supreme Court confirmation.

“No one wants to see layoffs, but we have a responsibility to ensure that taxpayer resources are used in an appropriate and equitable manner,” Toomey and Lee said in a joint statement.

Congressional leaders had been discussing two different airline bills with key differences, including where the money comes from and how to address tens of thousands of workers who have already been furloughed.

One bill from Senate Commerce Committee Chairman Roger Wicker (R-Miss.) would re-appropriate unused funds from the CARES Act, along with some new money. A second bill introduced last week by House Transportation Committee Chairman Peter DeFazio (D-Ore.) would consist of all new funds.

DeFazio’s bill would also compel airlines to recall workers they’ve furloughed in recent months, including around 40,000 employees who lost their jobs on Oct. 1, an issue which isn’t addressed by Wicker.

There are also tens of thousands of aviation workers who have taken unpaid leave and who could be brought back onto payrolls if the payroll support legislation is passed.

A growing number of Democrats — particularly those with airports in their district — had been urging their leadership to quickly approve the payroll relief. There has also been enormous pressure from labor groups, who are pushing for airlines to reverse roughly 40,000 furloughs that were finalized last week.