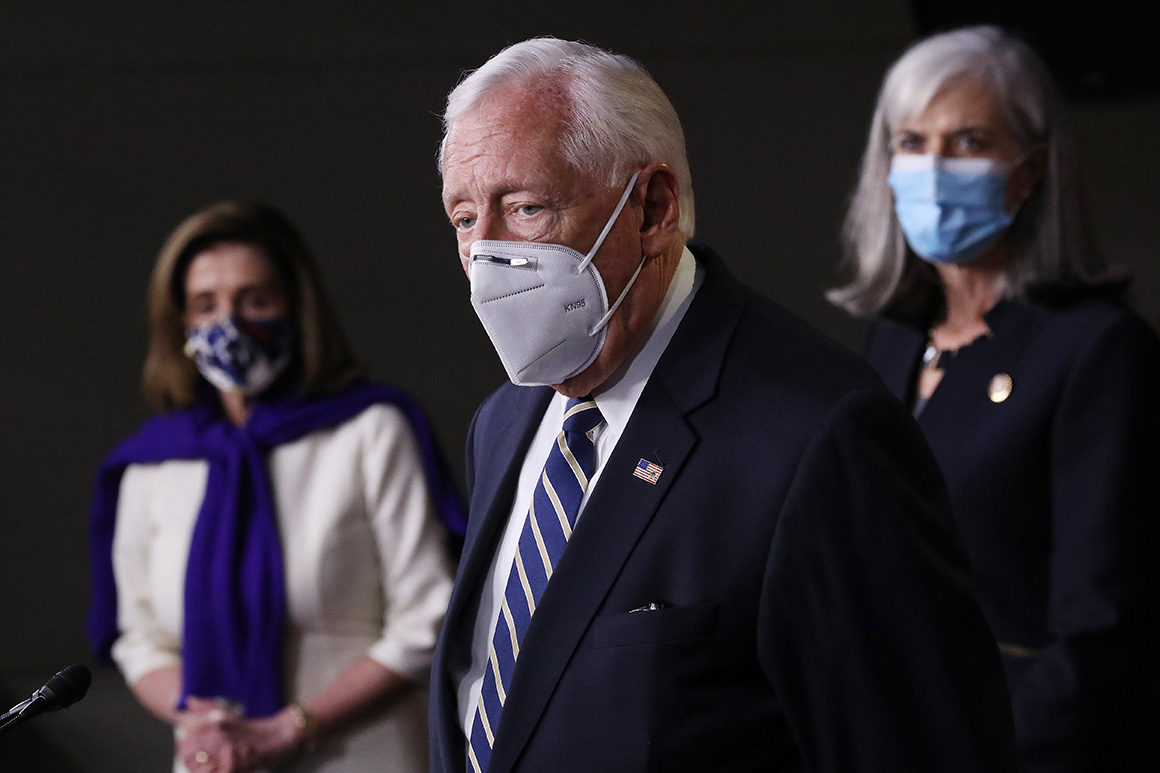 Leaders in both chambers have said they must confront the coronavirus crisis before Congress leaves likely next week until the new year. But there’s no agreement on how to do that and only days to figure it out.

“In light of the COVID crisis that confronts us, I am hopeful that members will come to grips with decision-making — that will be a compelling reason for them to do so and reach compromise,” House Majority Leader Steny Hoyer (D-Md.) told reporters Wednesday.

Hoyer talked to Senate Majority Leader Mitch McConnell (R-Ky.) on Monday — with plans to chat again Wednesday — and said the two agree on the need to provide stimulus relief. But the window for action on Covid-19 assistance is quickly closing and McConnell and Speaker Nancy Pelosi remain on vastly different paths, dimming the likelihood of a deal in the coming days.

“[McConnell] and I both agree that it would be optimal, if in fact we get to an agreement by the end of this weekend, get that agreement put on paper and memorialized so that we can consider it as early as Wednesday or Thursday of next week,” Hoyer said. “I know that sounds very optimistic.”

Despite a flurry of activity this week, congressional leaders and the White House haven’t coalesced around a plan. Lawmakers, who haven’t approved any substantially new aid since April, are under pressure to deliver relief as virus cases spike across the nation and the economy continues to falter.

Pelosi and Senate Minority Leader Chuck Schumer offered a secret proposal to McConnell and Treasury Secretary Steven Mnuchin, but it doesn’t appear to be gaining traction. A bipartisan group of senators released a $908 billion plan on Tuesday that includes $160 billion in state and local aid and $180 billion in additional unemployment insurance, among other things, but leadership has barely acknowledged the proposal. And McConnell is on his own path, with plans to revive and tweak his targeted package for a vote.

Mnuchin touted the McConnell bill on Wednesday, saying the president would sign the bill. “We look forward to making progress on that,” Mnuchin told reporters on the Hill.

But Democrats have already dismissed the McConnell proposal as a partisan nonstarter, and even senior Republicans such as Sens. Lisa Murkowski (R-Alaska) and Susan Collins (R-Maine) pushed back, describing it as a messaging bill with little chance of becoming law.

Congress is known for pulling together major deals in the waning hours before a deadline — and this lame duck session likely won’t be different. But senior lawmakers have already started to discuss the possibility of staying in session for another week to wrap up spending talks, at the very least.

“I suppose it’s possible if we get up against [Dec. 11] and we’re not done yet we could do a short-term CR,” Senate Majority Whip John Thune said of a brief stopgap spending bill to buy more time. “But my hope is things come together on both fronts,” referring to coronavirus relief.

Sen. Joe Manchin (D-W.Va.) said on Fox on Wednesday that “we’re not going home for Christmas” without passing some stimulus.

But appropriators see pandemic aid as an issue for leadership that isn’t slowing down progress on an omnibus, aides said Wednesday. House Appropriations Chair Nita Lowey and Senate Appropriations Chair Richard Shelby have already agreed on topline funding levels for all 12 bills that will comprise an omnibus package — a major step toward clinching a final deal that would boost agency budgets through the end of the fiscal year.

Lawmakers likely need to reach an agreement in the coming days, with text of the omnibus spending package finalized by early next week in order to give the House and Senate enough time to set the procedural gears in motion for passage in both chambers.

Still, snags have popped up in recent days. For example, Lowey and Shelby have so far agreed to classify billions of dollars in veterans’ health spending through the VA Mission Act — legislation that President Donald Trump himself has championed — as emergency spending not subject to overall funding limits.

Appropriators hope to preserve what small increases are allowed in fiscal 2021 non-defense spending and spread that money elsewhere, avoiding cuts to popular programs that would follow if they had to accommodate about $12.5 billion in veterans’ health cost increases as non-emergency spending.

Earlier this year, Shelby suggested that Trump had signed off that arrangement, which has temporarily ensnared appropriations talks in the past. But now there are questions as to whether the White House will support emergency spending for veterans’ health.

The White House and the Office of Management and Budget didn’t respond to a request for comment on Tuesday. Pelosi spoke to Mnuchin about government funding on Tuesday, saying she “laid out the bipartisan progress that Chairman Shelby and Chairwoman Lowey have made.”

“I relayed my hope that the Administration would support this bipartisan path,” Pelosi said in a statement after the call, although it’s unclear if the two discussed veterans’ health spending.

A GOP aide close to the talks said Senate appropriators aren’t interested in holding “veterans’ health care hostage” when it comes to an omnibus deal.

A number of other issues remain open, including federal funding for police departments and the usual sticking points like border wall funding and detention beds as perennial problems.

Senate Republicans have proposed $2 billion in border wall funding, while House Democrats haven’t offered any more cash. Such issues are usually some of the last to get resolved and appropriators are still hopeful about finding a middle ground, which might just mean maintaining the status quo.

“I think things are on track,” one House Democratic aide told POLITICO. “Everyone remains optimistic that this can be finished.”

Burgess Everett contributed to this report.

Senate Armed Services Chair Jim Inhofe (R-Okla.) said that while he agrees with Trump on Section 230, the provision “has nothing to do with the military.” “You can’t do it in this bill....