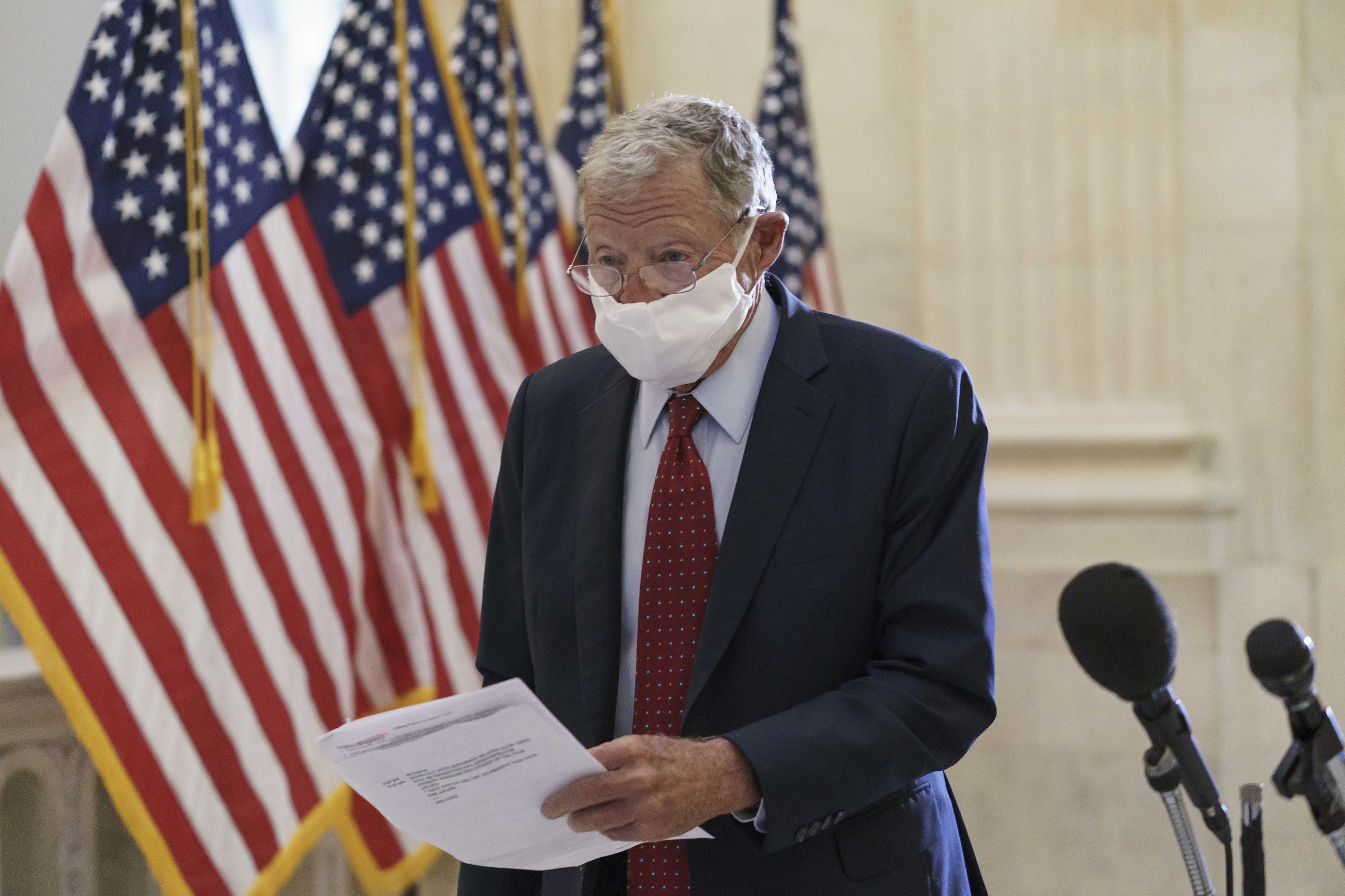 Senate Armed Services Chair Jim Inhofe (R-Okla.) said that while he agrees with Trump on Section 230, the provision “has nothing to do with the military.”

“You can’t do it in this bill. That’s not a part of the bill,” Inhofe said, adding that he has conveyed that belief to Trump.

In a pair of tweets Tuesday evening, Trump threatened to veto the bill if it does not include a full repeal of Section 230, which he has criticized as an unfair protection for social media companies whom the president believes are biased against him.

“At this last minute, this sudden threat on an item that’s not even part of a defense bill. … I don’t think we could do it in a thoughtful, logical way at all,” Sen. Jack Reed of Rhode Island, the top Democrat on the Senate Armed Services Committee, told POLITICO.

“It seems to be more out of spite than anything else,” Reed said of the president’s threat, warning that Trump’s posture threatens several important policy moves, including a pay raise for U.S. troops.

The House is also set to move forward with a compromise defense bill that doesn’t alter Section 230, according to two House Democratic aides.

The president’s Twitter broadside puts Republicans in a bind as they look to maintain the support of Trump and his base heading into the Georgia runoffs next month that will determine control of the Senate. If GOP lawmakers back Trump, they risk tanking the popular military policy bill that’s become law each year for nearly six decades; if they buck him by ignoring his complaints or overriding a veto, they risk stoking Trump’s ire.

Still, Republicans on Wednesday showed some signs of exasperation with the president’s latest effort. As one GOP lawmaker put it: “Republicans are sick of this shit.”

Sen. Mike Rounds (R-S.D.), who sits on the Senate Armed Services Committee, put it more delicately. While he said he understood the president’s frustrations with Section 230, it was not worth imperiling the broader defense bill.

“The NDAA is so important to the men and women that wear the uniform that this should not be an item to veto the act over,” he said. “So I would hope he would reconsider his position on it.”

And Senate Majority Whip John Thune (R-S.D.) said his “preference” would be to pass the NDAA and then address Section 230 separately.

Some lawmakers are already working with the White House to try to address the president’s demands. Sen. Roger Wicker (R-Miss.), who chairs the Senate Commerce Committee, said he submitted possible legislative language to the White House on Section 230.

“This was not an idea I had advocated. I’m simply trying to be of assistance to the committee … and to the administration,” Wicker said, adding that he doesn’t believe the president will ultimately veto the NDAA.

“The purpose of the bill has always been to support our troops and to protect American national security,” Thornberry said in a statement. “Disagreements on all other issues have been put aside. This year should be no different.”

Not all of Trump’s allies on Capitol Hill want him to back off from a fight on the defense bill.

“I hope we can do it,” said Senate Judiciary Chair Lindsey Graham (R-S.C.). “If I were him, I’d use all the leverage I could.”

Some Senate Republicans have been pushing to include changes to the online shield short of repeal in the defense bill. Separately, Graham’s panel is slated to vote on a bill Wednesday to alter Section 230.

“Right now they’re getting a free ride to be editors and publishers to censor certain conservative messages,” Kudlow said in an interview on Fox Business. “We don’t like that one bit, and the president believes the NDAA is one way to amend that and make it better.

“He’s not dictating the language yet, but he wants an amendment that would essentially curb in one way shape or form the unbridled liability protection shield that these firms have,” Kudlow added.

Sen. Richard Blumenthal (D-Conn.), a co-sponsor of the only bipartisan bill targeting Section 230 to advance out of committee this Congress, called the veto threat “deeply dangerous and just plain stupid.”

He added, “Reforming Section 230 deserves its own debate — one that I’ve helped lead in Congress, and which I look forward to continuing with a more serious, thoughtful administration in January.”

The Section 230 push is the second time Trump has threatened to nix the defense bill this year. Over the summer, Trump promised to veto any defense legislation that would remove the names of Confederate leaders from 10 Army bases, even though provisions that would rename bases were included in both House and Senate bills with bipartisan support.

The final defense bill does include a provision that would spur the Pentagon to remove the names over a three-year period, according to an aide for Sen. Elizabeth Warren (D-Mass.), who authored the proposal. The provision was included in the Senate-passed bill.

Renaming bases has been one of the thornier issues for negotiators, with Democrats digging in against Trump. House Majority Leader Steny Hoyer (D-Md.) reiterated that the provision is a deal-breaker for Democrats.

“If that language is not included in the defense bill … I would be reluctant to put that bill on the floor,” Hoyer told reporters.

The Senate finally agreed Wednesday to name its slate of members to formal talks with the House on a compromise defense bill. Even though negotiations have been ongoing for months between the leaders of the Senate and House Armed Services committees and their staffs, the procedural move is needed to formally bring a final defense bill up for a vote.

The NDAA is expected to be one of the last major pieces of legislation that passes this year, and during Trump’s presidency. Lawmakers are aiming to leave the nation’s capital in the coming days ahead of the holidays, but must still work out a funding deal to stave off a government shutdown by the end of next week. Congressional leaders are also eyeing another round of coronavirus economic relief that has been stalled for months.

“Name a time that it’s not this way,” Graham said. “Name a time where we’re done Dec. 1, go home and enjoy Christmas. I mean, it’s always this way.”